Bettercup.Earth: Taking a Stand for a Sustainable Planet

Stand.Earth, whose activism to help save the earth’s forests and wild places was well known under the name ForestEthics until March 22nd. After years of deliberation, the organization decided it was time to create a broader vision — to take a stand against global warming and climate change, which led it to choose Stand as its new name. While the new moniker is broader in nature, deforestation is still an enormous part of its mission.

Never running from its activist roots, Stand jumped right into the fold by taking on coffee giant Starbucks with its Bettercup.Earth campaign. Stand is challenging Starbucks to commit to three core issues that, in 2008, had promised to put in place by 2015, yet has failed to deliver:

Stressing the importance of this campaign in an August statement, Todd Paglia, Executive Director at Stand elaborated, “Starbucks is just the type of innovative company that could be leading the charge to switch to an environmentally-friendly alternative. With 4.3 billion paper coffee cups leaving their stores each year, Starbucks has the chance to make a real difference. But instead of going with innovation and leadership, Starbucks is leaning on PR games and passing the buck.” 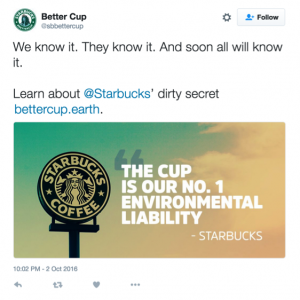 Stand.Earth and its call to action campaign, Bettercup.Earth, are great examples of how a .Earth top level domain can drive home a statement. The organization and its campaign to create a more sustainable Starbucks serve as ideal case studies for how to use the .Earth domain extension in ways that support overall branding and mission, and we applaud the activism and stance that Stand.Earth is taking to protect our planet.

If you own an organization that is also making the world a better place, we recommend securing your own .Earth domain. Please click here to secure your domain now.